Palestinians Between Israel and Jordan: Squaring the Triangle Raphael Israeli 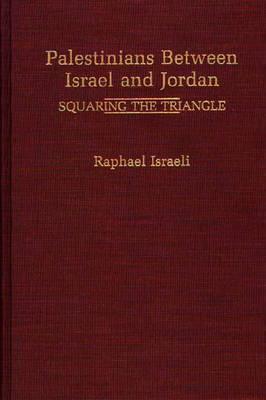 He then analyzes and discusses in-depth all the solutions envisioned so far (status quo, Jordanization of Palestine, Palestinization of Jordan, annexation, territorial compromise, autonomy and transfer of population), focusing on the reasons for their failure and/or unacceptability.Professor Israeli challenges conventional wisdom and comes up with a workable answer that could square the triangle.

The solution, based on mutual recognition and respect, is premised on a rigorous and fair parallelism between the claims and rights of both parties, Israelis and Palestinians. This means that Jews, as well as Palestinians, should be recognized as a people (and not only a religion) by their adversaries--equally entitled to self-determination, to their national liberation movements (Zionism in the case of the Jews) and to the territory in dispute (i.e., the whole of Mandate Palestine).

These premises being accepted, the problem, now reduced to a quantitative and therefore negotiable one, will be to divide the land at stake into a State of Palestine (east) and Israel (west). Having thus tried to meet the contradictory needs of both parties, Israeli comes up with a novel and imaginative solution--embodying a new concept of sovereignty, that could well serve as a model elsewhere--to the problem of minorities left in Israel or Palestine. It rests on the possibility of opting for one of two statuses in each country: --that of full citizen, with all the rights and obligations citizenship creates- or --that of resident alien, with all the rights and protection, as well as inherent limitations, that this status brings.

The adoption of this unique solution would open up many possibilities for cooperation and peace in the Middle East.

Comments
Comments for "Palestinians Between Israel and Jordan: Squaring the Triangle":